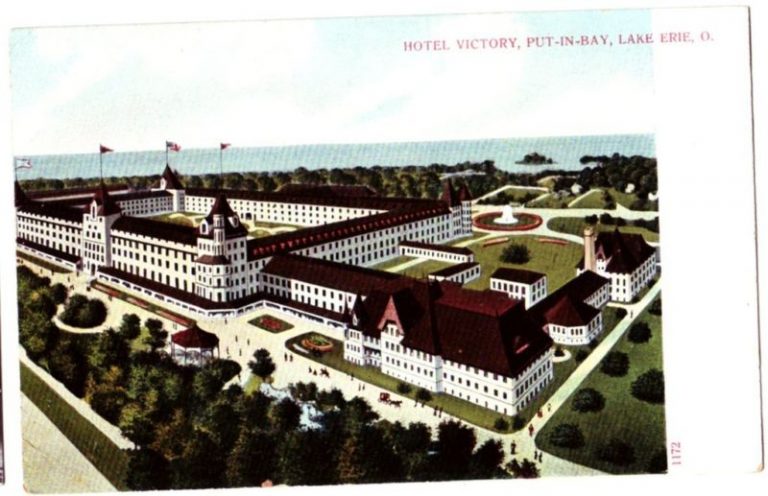 The island offers a rich history, and tourists have been visiting Put-in-Bay for more than 200 years.  After the war, many sightseers came to the island to attend celebrations and festivals that commemorated the Battle of Lake Erie.  Others would pack lunches and picnic along the waterfront, making sure to leave the island by nightfall, as there were no hotels or lodgings on the island for tourists.  In fact, it wasn’t until approximately 50 years after the War of 1812 that the first overnight accommodations were born.

Perhaps the most famous—and certainly the “grandest”—hotel to ever occupy the island is known as Hotel Victory. 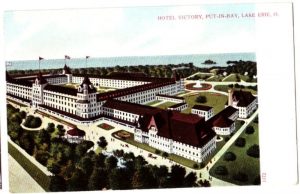 Although a few small hotels grew (and burned to the ground) from 1860 to 1880, visionaries began to see Put-in-Bay as the land of opportunity.  So, in 1887, a group of investors, spearheaded by J.K. Tillotson, sought to build a luxurious, grand hotel on the island.  When it was completed, Hotel Victory stood as the largest hotel in the United States at the time.

The financiers chose to build Hotel Victory at Stone’s Cove in South Bass Island State Park.  The hotel site covered 100 acres. Twenty-One acres were reserved for the hotel, while the remaining 79 were divided into 475 villa lots that were sold to interested parties. 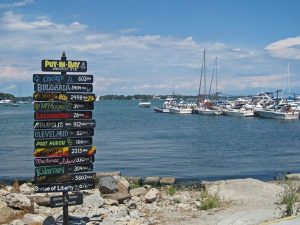 A Cornerstone and a Celebration

As with other elaborate, island ceremonies that commemorated the anniversary of Perry’s Victory or celebrated construction of the Put-in-Bay Monument, the first major gala for Hotel Victory was a grandiose event.  At the Battle of Lake Erie’s memorial celebration in 1889, seven steamboats brought 8,000 people to the island to laud the placement of the hotel’s cornerstone. 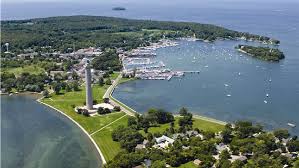 Construction Begins on the Monument

An architect from Toledo, E.O. Falls, designed the plans for the hotel.  His vision was to have the hotel shine like a beacon from miles away as travelers approached the island.  The idea was a majestic, English, baroque construction that emulated structures during the reign of Queen Anne.  His blueprints included towers, brickwork, porches, and a host of other intricate details.

Without question, this project was a massive affair.  Builder George Feick (of Sandusky) had to assemble his own sawmill, dining hall, and dorms for his men to complete the project.  He employed 75 carpenters at one time in to create the largest hotel in the country. 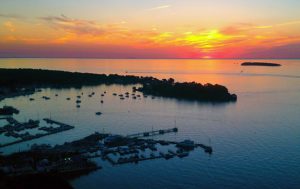 The Grand Opening (and Even Grander Details)

Hotel Victory opened on June 29, 1892.  Yet, 275 men continued to work until all the details were completed four years later in 1896.  Upon completion, it was the “grandest” hotel in America.

Its main building was 600 feet long, 300 feet wide, and surrounded a courtyard.  A giant lobby connected the main building to the dining room, kitchen, and the servants’ living areas.  The two dining rooms could serve 1,200 guests at once.

The hotel featured a 30-foot long bar where cocktails flowed late into the evening (and early morning).  The estate featured 625 guest rooms and 80 private baths.

One mile of carpet decorated the halls, and 20,000 yards of carpet accentuated the rooms.  This incredible Put-in-Bay hotel included 16.5 acres of flooring, 1,700 doors, and 2,500 windows.

The property’s landscape was equally impressive.  The grounds championed a beautiful bridge that stood above a ravine.  A marvelous fountain captivated visitors’ senses, and, a few years later, so did an enormous swimming pool (100 feet long, 30 feet wide, and 8 feet deep) that featured a roof to protect from the sun.  More than that, an opulent boardwalk connected hotel guests to the shore.  In total, the hotel cost over $1 million, which is equivalent to about $30 million dollars today.

Financial Troubles and a Resurrection

Predictably, given the extravagant expenses, two months after Hotel Victory’s grand opening, the business couldn’t pay for its expenses.  Creditors pushed the hotel into receivership, and, to make matters worse, a few months later, the stock market crashed, and the hotel closed until 1896.

Business steadied the next few years…until a smallpox outbreak on the island in 1898 prompted a quarantine. The famous Put-in-Bay hotel was sold again in 1898 and the new owners hired the visionary Thomas McCreary as new manager.

Under McCreary’s oversight, the Hotel Victory experienced its greatest popularity and success.  McCreary was an exceptional publicist, promoter, and host.  He touted the hotel as “the” place to stay on the island, and, for years, his words were accurate.

During his tenure, McCreary hired a German sculptor (Alfons Pelzer) to design the Victory Monument on the hotel grounds.  22 feet high, the monument featured a winged woman holding a wreath in one hand and a staff in the other.

When McCreary died in 1907, however, so did any significant future progress.  The hotel closed again in 1909, and, within two years, the structure was covered in decay.  Hotel Victory received one last push and was re-opened in 1918 and then sold again in 1919.  Forecasters predicted that the country would experience an economic surge now that World War I had ended, and investors hoped that that the hotel would, once again, return to glory. 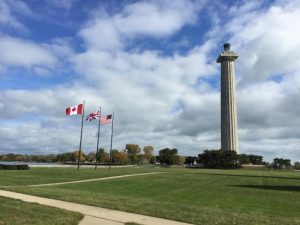 Hope Burns Away for the Hotel Victory

That hope was smothered on August 14, 1919 when a massive fire started at 7:30 p.m. on the third floor.   Crowds gathered on the island as flames ascended 75 feet into the air and could be seen as far away as Sandusky and Detroit.  Within an hour, Hotel Victory, the most extensive undertaking in the island’s history, was lost.

The Put-in-Bay Fire Department was able to prevent the fire from spreading across the island, but the blaze burned for several days while thieves looted the property.

Old legend suspected investors of arson, but that theory was quickly discarded, as they didn’t have much insurance.  The cause was assumed to be a faulty light wire, and damage estimates ranged between $450,000 and $1 million.

In 1938, the state purchased acreage on the old Hotel Victory site and built a new public park.  It is now a campground called South Bass Island State Park.  There are a few signs commemorating the ruins of the old hotel, such as the swimming pool and the Victory Monument. Grab a Put-in-Bay taxi and go check it out for yourself when you visit.

Today, when tourists visit the island and vacation at the luxurious Put-in-Bay Condos or the Island Club, they experience a taste of that freedom, joy, and peace that Hotel Victory once represented, and what Put-in-Bay will always offer.

Put-in-Bay lodging resorts are plentiful in Put-in-Bay Ohio. Hotels, Conference centers, and rental homes are all accessible by golf cart rentals or taxi services if they’re not within walking distance of downtown Put-in-Bay already. Check-in at hotels and rental homes is simple. The nightlife downtown is insane fun. You can expect to find swim-up bars, awesome restaurants, and famous attractions. Book your getaway today!!!

Lakeview lodging is easy to find and most places will have free WiFi. Outdoor pools are found at nearly all lodging places, including the Put-in-Bay Poolview Condos and Bird’s Nest Resort, as well as island Club Rentals. But enough about those places, the Put-in-Bay Victory Station Hotel is one of the most historic building on the island and makes a great choice for lodging! There’s a reason they’ve been around so long, they’re truly one of the best hotels on Put-in-Bay island.