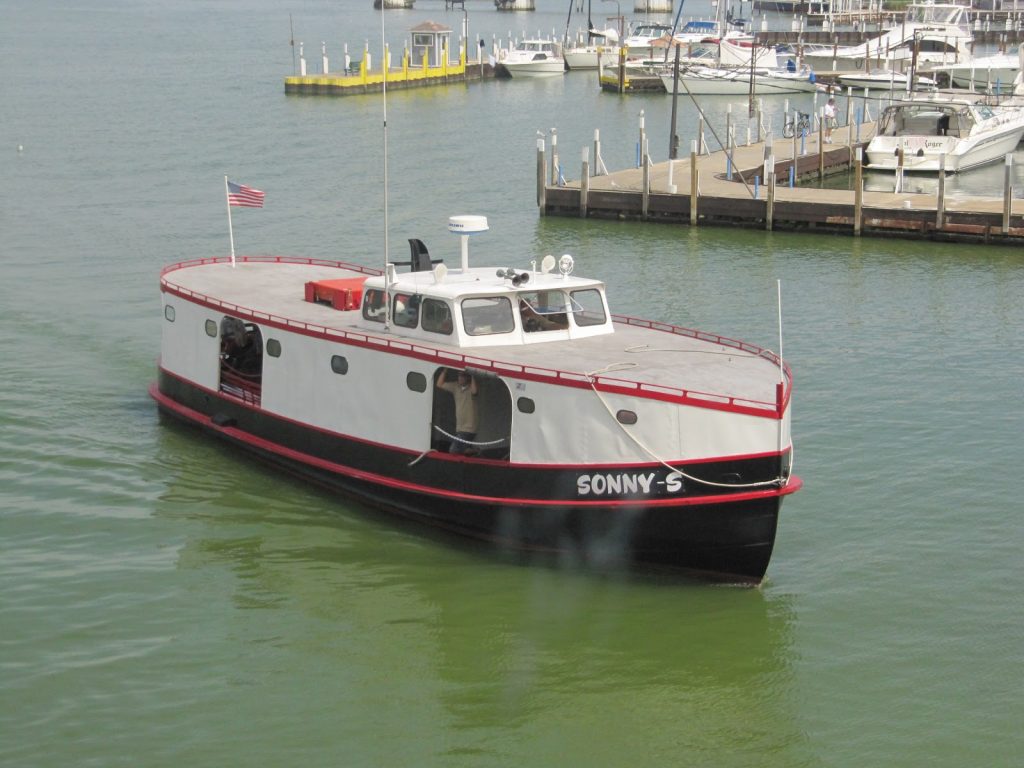 For guests wanting to explore more of the Lake Erie Islands, board the Sonny-S Ferry to Middle Bass Island. The ferry leaves downtown Put-in-Bay from the Boardwalk dock and lands on Middle Bass at the same terminal as the Miller Ferry. Many tourists take the Jet Express ferry boat from Port Clinton Ohio because it offers late night service, walk about 100 yards along the marina, and board the Sonny-S on the other side of the public boat docks. The reverse is true for getting back to PIB. Bicycles are welcome as are pets so no need to leave your doggy behind!

The ferry only runs between the islands and is the only ferry all day on Saturdays. If you want to get here from other cities such as Cleveland, Sandusky Ohio (ie Cedar Point), Catawba Island, or even Kelleys Island,  then you will have to take a different boat. It’s about a half hour ride to the islands. The Miller Boat Line is a good choice for direct service to Middle Bass, or even a trip to South Bass and then a quick hop on the Sonny-S Boat Line to Middle Bass.

The Sonny-S is an island favorite! 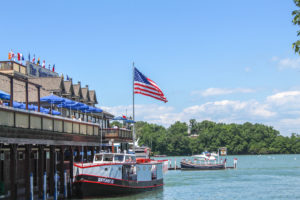 On Middle Bass, guests can tour the grounds of the recently improved State of Ohio Park. The remains of Lonz Winery have been converted into a place that can be toured. The park is on prime land with Lake Erie Frontage. Lonz Winery used to be one of the biggest tourist attractions in the area until the patio collapse years ago which helped shut it down and seal its fate. This was the most tragic of recent island events.

Also, on the island guests can head to one of the two watering holes, St. Hazards and JF Walleyes. Both serve up icy cold drinks and hot meals to travelers. The island of Middle Bass is far less developed than Put-In-Bay. Therefore, it is an excellent place to unwind and decompress. It is also the perfect getaway via ferry service for a leisurely golf cart tour, bike ride or stroll. The island is mostly residential so there are interesting properties to see.

Most guests stay on the Put-in-Bay side of the bay where there is free parking. While Middle Bass is relaxing, Put-in-Bay is just the opposite! You can spend all weekend enjoying Put-in-Bay attractions, Put-in-Bay lodging, Put-in-Bay golf cart rentals, put-in-bay hotels & resorts and then come back in the evening on the Sonny-S passenger ferry.

The ferry runs almost every Saturday during the summer months for visitors and a few trips during the week for locals and students. The last day for a boat ride on the Sonny-S in 2020 will be September 26.

Want to win a free weekend at Put-in-Bay? Enter our Free Weekend Contest! 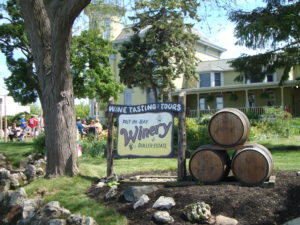 Charles Schneider, the elder, was born October 18, 1822, in Saxony, Germany, and died in 1893, on Middle Bass Island, to which he had come in 1864. In the spring of 1861 he had come to Sandusky, Ohio, where he followed his trade of shoemaker, learned in Germany, and when he came with his family to Middle Bass it was with the expectation of continuing as a shoemaker. The cultivation of grapes as a business was then in its beginning here.

Mr. Schneider was foresighted enough to see that industry would be more profitable than work at his trade. He soon had become the owner of a small tract of land, on which he set out grape vines which developed almost beyond expectation and insured him a fine vineyard. He devoted himself mainly to this industry until the time of his death.

Charles E. “Sonny” Schneider, Jr., whose family started and still operates the Sonny-S ferry to Put-in-Bay, died on September 1, 2008. The “Sonny-S” is now managed by Captain John Schneider, owner of the vessel.

Most people don’t know that Middle Bass is the smallest of Ohio’s big three Bass Islands. Whether you’re interested in biking, camping, boating or just chilling, now is the time to hop on the Sonny-S ferry for a ride over to Middle Bass Island. The first thing you notice is the sense of peace. This is, after all, 850 acres of largely undeveloped land surrounded by a big lake.

Fishing and bird watching are popular outdoor island pursuits. Bikes can be rented at the marina and are the best way to take in the island splendor. There are also tours of the refurbished Lonz Winery that the state bought. Since it closed, following a tragic balcony collapse that killed one guest, the island has seen far fewer visitors because there is not that much to really do. It’s quiet now and very relaxing and accessible by the Sonny-S.

The state bought the old winery, as well as 124 acres of land and a decrepit marina, in 2000. The combination became Middle Bass Island State Park in 2001. The changes since then have been vast with even more planned. The marina has been being expanded to hold 300 boats, and restrooms and showers have been added. Water and electricity are available on all slips, and there’s a putt-putt course for the kids. The revamped marina draws pleasure craft boaters from the mainland as well as Put-in-Bay boaters who are looking for a lull in the party, a quiet drink at sunset.

Fewer than 100 people call Middle Bass Island home all year round. The school system is actually located across the bay on South Bass Island with students flown to and from classes every day. During the frozen, icy winters, many locals go island hopping on snowmobiles. 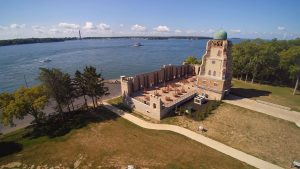 Historic Lonz Winery on Lake Erie’s Middle Bass Island has been a tradition since the 1800’s. First opened during the Civil War as the Golden Eagle Winery, by 1875 it was the largest wine producer in the United States. The winery, with its castlelike architecture, looms like a fortress along the beach. Tours of its century old wine cellars, dug by hand during the Civil War, are topped with tasting of the winery’s wines and juices. Although wine is no longer produced on the island, Lonz maintains Concord and Catawba vineyards and sends the harvest to the mainland for processing.

Peter Lonz started producing wines on Middle Bass Island in 1884, and his son, George, designed the magnificent Gothic architectural structure that even today bears the Lonz name. Over the years, countless dignitaries, including five United States Presidents have been guests on the island. Mr. Lonz was considered to be kind of a character (you have to be to live on an island) however he kept the winery going even through prohibition. Through those tight times he sold grape juice and on the back of the labels were instructions to avoid, as these steps would lead to the juice turning to wine.

Mr. Lonz had no family so when he passed the winery operated off and on till Paramount purchased it. Tours, conducted by trained guides, began with a multi-media presentation followed by a visit to the century old wine cellars, and concluded with a wine tasting in the cellars. It remained open until July 2000, where on a busy summer day with a 1000 or so tourist having the usual weekend party there, tragedy struck. The winery was scheduled to close in the fall of 2000, when it was cut short by the side terrace caving into the wine caller below, killing one and injuring 70 others. The terrace was constructed in the 1960’s and back then the building codes were much different, as was the Sonny-S.

It was a sad way to bring the end to such a big part of our Lake Erie History. The winery is now owned by the State of Ohio and became a State Park a few years ago and it will still remain a historical land mark to be visited for years to come. Visit soon for your first time or your 100th. 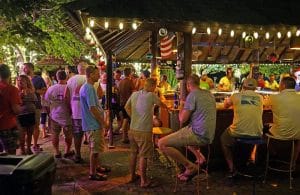 St. Hazards is a waterfront Caribbean influenced resort on Middle Bass Island, Ohio and the home of Hazards Microbrewery & Restaurant and the Saints & Sinners Beach Bar. It has everything from waterfront condos to cabins and campsites for rent. The on-site pool is home to the Saturday pool parties and there is Free Wi-Fi for guests. We have something for everyone, you can come relax by the pool and have a drink at the Tiki Bar or come in for dinner in the unique restaurant where you can have a meal from them that has everything from fresh cut fries to paella. A quick getaway aboard the Sonny-S.

St. Hazards is inspired by travels to Le Select where Jimmy Buffet got started with Cheeseburger in Paradise. Hazards has a main restaurant indoors with a wraparound seating deck just outside with seating available along with a couple of hammocks. The inside restaurant is inspired by Commodore Oliver Hazard Perry and the islands located near the equator, particularly St. Barth’s and Bali. Captivating photography, retro ads, and Oliver Hazard Perry portraits hang from the walls, along with some Middle Bass and Put in Bay relics.