Breathtaking Footage – Tens of Thousands of Cormorants In Flight 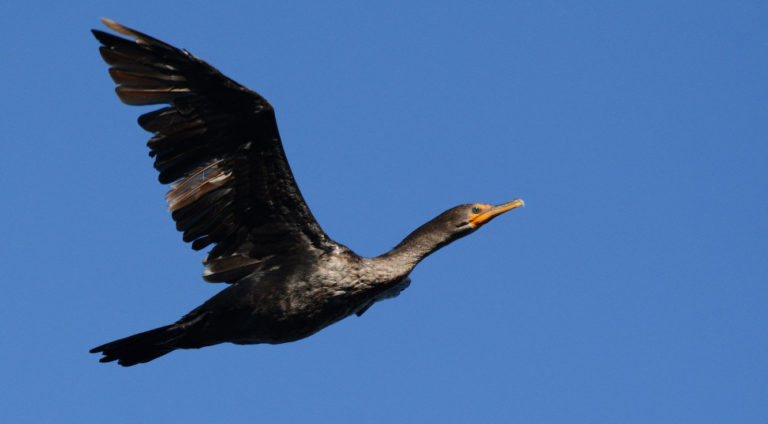 You’d be forgiven for thinking that you were watching an episode of Planet Earth, but this is actually amateur footage taken from the Put-in-Bay Condos on Lake Erie. Tens of thousands of cormorants skim their way across Lake Erie on their way to, well, wherever it is they’re heading. The stars of this breathtaking video are the double-crested cormorant. The sight of them isn’t exactly welcome by everyone in the Lake Erie Islands community. We couldn’t get David Attenborough to do a voice over, so you’ll have to settle for a video. We will tell you a little bit about this fascinating fowl and the controversy surrounding it in the Great Lakes.

While you would never know it based on this video, there was a time that the cormorant was in serious danger. They were the victims of population control from fishermen. Fishermen saw the cormorant and their pound-of-fish-a-day diet as a threat to their livelihood. The introduction of DDT and similar pesticides nearly finished the cormorant off. The chemicals entered the cormorants’ system through the fish they’d eat, and had devastating effects. The shells of the cormorant’s eggs were thinned by the chemicals, making them much more fragile. If an egg managed to make it long enough to hatch, the birthed bird would often be suffering from deformities. It is estimated that there were as few as 150 nesting pairs in the Great Lakes region in the early 1970’s.

The tide turned for the double-crested cormorant in the ‘70’s. The federal government banned DDT, and included the cormorant in the Migratory Bird Treaty Act. These two major developments allowed the cormorant to survive. The invasion of the alewife, a species of herring, allowed them to thrive. The alewife found their way into the Great Lakes in the 1980’s and their numbers exploded due to no natural predator in the water itself. However, they became the perfect food for the cormorant. The cormorant population skyrocketed and has continued to climb since, now numbering in the hundreds of thousands. You will see them all over Put-in-Bay, especially in places like According to some, this boom has had many negative effects on the local ecosystem. 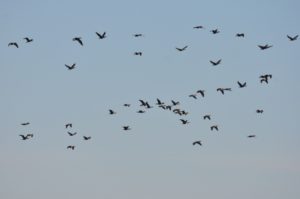 A Subject of Local Debate

The debate over what to do about the cormorant continues today. The U.S. Fish and Wildlife Service issued permits to cull over 18,000 cormorants this summer across the Midwest. Proponents of these culls point to the danger the cormorants pose to the fish population. They also cite the economic impact on sport fishing. Furthermore, the cormorants’ guano is highly acidic, and damages cars and buildings as well as ravaging local flora. Those opposed to cormorant population reduction have concerns about the impact the culling methods have on other fauna, such as the heron. Heron eggs are knocked out of nests by people spraying cormorant eggs and are subsequently abandoned.

The reverse is true about the gull population. The gulls derive great benefits from the empty cormorant nests, and could potentially increase their numbers. This is a problem, as scientists believe the gull population is also already too high to support. Pop reduction opponents also dispute the actual impact the cormorant have on fish population in the region.

What’s next for the Cormorants?

We don’t know what the future holds for the cormorant in the Great Lakes. The sad but unavoidable truth is that their fate will almost certainly be decided by humans. It must be considered that what is good for the cormorant may not necessarily be good for the Great Lakes ecosystem as a whole. Ecologists must find answers to these questions. But in the meantime, we can certainly take a moment and appreciate the majesty of a legion of these beautiful birds gliding along towards their destination. And if you’d like to enjoy the view of the lake in this video, head on over to the Put-in-Bay Waterfront Condos website to make a booking for the 2019 season!