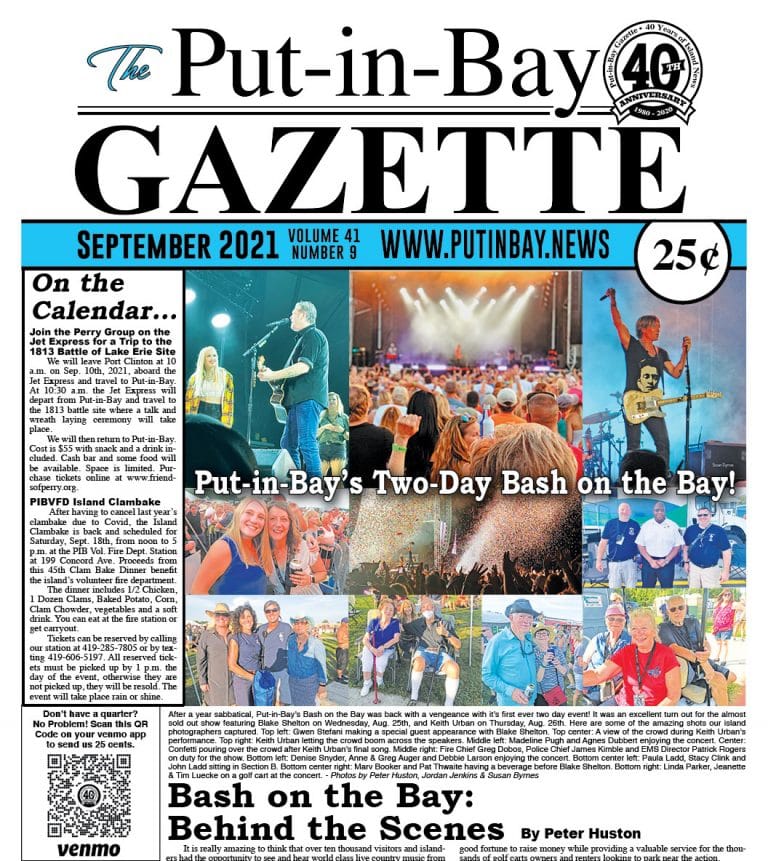 putinbay.com is proud to present the Put-in-Bay Gazette. For the best South Bass Island journalism, visit putinbay.news and subscribe to the Gazette today!

September is certainly welcome this year. Even with loads of visitors, employee shortages and a few product shortages, we all made it through. And just like the summer of 2020, the summer of 2021, too, will be memorable. We will say one thing about this summer, the weather might have been a little dryer, but the temperatures for the most part were very up until the end of August when things got a bit hot.

We’d like to give a shout out to the Village workers who went beyond their normal duties and cleaned streets and johns, in part, due to the worker shortage most of the island businesses experienced this season.

We couldn’t help but notice the dockmasters at the Crew’s Nest who began using electric bikes to get from dock to dock. Some of them had been using those motorized skateboards which were certainly a risk.

The underground electric lines that run from the main part of South Bass Island to East Point are going to be dug up before the north seawall reconstruction of the Monument begins. Temporary overhead lines will go over Monument grounds on the south side of Bayview Ave. until work is wrapped up.

Chan Steven’s old home just east of the Monument has a completely new look after Mike Yoder and crew from Anywhere Tree Care cut down and trimmed several big trees on the property.

Every so often you get some hotshot who decides to jump off one of the ferries. In August, one jumped off the Jet Express as it was returning from Put-in-Bay to Port Clinton. A post on social media from the Port Clinton Police which was later taken down read, “I say nothing like jumping off a large high-speed catamaran ferry equipped with twin water-jets capable of pumping 1,000 gallons of water per second. Sounds safe to me.” Police also suspected the man might have had a tad or two too much of firewater when he was arrested.

For those of you who are planning on staying on the island this winter, be prepared for much below normal temperatures and above normal precipitation. Well, that’s what the weather forecasters are saying, but then again they sometimes don’t even get the daily weather right.

I guess my wife is right about my hearing. She kept telling me about going to the “Bath in the Bay.” It wasn’t for several days that I realized she meant she was going to the “Bash on the Bay,” the two big concerts at the Put-in-Bay Airport where headliners Keith Urban and Blake Shelton entertained in August.

Oh! My Lord! I finally saw a full cooler flip off the back of a rental golf cart, spill onto the road and pop open scattering all kinds of food and drink on the pavement. This is one of the reasons some island officials want to ban coolers on the back of carts. The people got off the cart, picked it all up off the street and went on their way. After seeing this, I don’t think I’ll ever be the same! It was a horrible experience and defied everything I’ve come to believe. I’m just thankful my grandkids didn’t see it.

Take a Ride in the Iconic Ford Tri-Motor Sept. 10th to 12th

As Mother Nature did not cooperate for their July visit to the island, Liberty Aviation Museum has announced they’ll be returning to the island with their 1928 Ford Tri-Motor, “City of Port Clinton/City of Wichita”, on Historic Weekend (September 10-12, 2021) offering rides to the public.

These sightseeing flights will be available for three days only (9am-5pm) and will depart from the Put-in-Bay airport. (All flights are weather permitting.) This is a great opportunity to see and experience a true piece of living history while enjoying a unique bird’s eye view of the beautiful Lake Erie islands.

Tickets are $77 for adults and $52 for children. Discounted tickets can be purchased prior to the event by visiting www.flytheford.org or calling 1-800-359-6217.

A portion of each ticket sold will help fund the THF’s Ford Tri-Motor restoration project located at the Liberty Aviation Museum in Port Clinton, Ohio. Learn more about this unique project by visiting their website at www.RestoreTheFord.org

President Bob Smith convened the August 28th meeting of the Put-in-Bay Property Owners’ Association at the Perry Cave Shelter House at 9 a.m. Members were addressed by Barbara Rowles from the Monument, Rich Hahn for the Road Race Reunion Committee and Pastoral Leader Jim O’Donnell of Mother of Sorrows.

Superintendent Rowles explained the seawall restoration projects which will begin in the Spring and be finished in 2023. Construction of the expanded north seawall will require the temporary above-ground routing of the electrical lines to East Point. The top three feet of the south wall will be replaced. Funds have been found for the 2023 – 2024 restoration of the upper plaza. 2023, she said, may be “messy.”

Mr. Hahn passed out posters, programs and race schedules for the September 2021 reunion races which will include 100 racing cars and 50 street exhibition vehicles. Each year is better than the one before and is supported almost entirely by entry fees ($450) and volunteered contributions and labor. He noted the restrictions organizers face: cars must be insured while on the island, emergency services must be available (if the EMS is called away the race in progress must be temporarily stopped), 800 hay bales must be found and located as well as 50 radios, fire extinguishers etc. He asked for short term volunteers (such as flaggers from 4:30 to 5:30 p.m. for the Tuesday Old Course Parade) and longer term volunteers to assist with the various planning committees.

Deacon O’Donnell remembered the tragic events of December 12, 1983 which led to the construction of the Memorial Carillon and reported on efforts to maintain it. A tree which obscured the view and may have silenced a bell has been removed. Despite lightning damage the bells are all functional and repairs on the music system have been undertaken.

Bob Smith announced that the Put-in-Bay Property Owners’ Association would meet next on September 25th at 9 a.m. at the Perry Cave Shelter House. The agenda will include the election of new members to the Board of Directors.

A small but mighty group was happy to participate in the Middle Bass Island Poker Kayak Day after its cancellation last year due to the COVID-19 pandemic!

Every cent of Registrations goes to benefit the Put-in-Bay Township Park District’s preserves on Middle Bass by helping to pay for signage.

This year’s winners were Jerry Schrenk (1s tprize: round trip ferry tickets for two adults and a vehicle), Esther Fetzer (2nd prize: gift certificate to the MBI General Store), and Jacquie Adams (a bag of frozen shrimp from Costco). Many thanks to Julene Market for donating the ferry tickets and to Joe Hart and Eddie Sheller for donating the General Store gift card. They have donated these prizes all six years we’ve held the event!

We just couldn’t pull off this event without the help of so many, so I am proud to recognize this year’s team: Lisa Brohl, Sue Ungvarsky, Dawn Schrenk, Leah Bilski, Regan Monnett, Ken and Linda Leque, Betsy and Jim Brohl, Shannon McDonald, Olive O’Rourke Scherf, Kim Egner, and some unidentified young men who helped move a picnic table into shade!

Thanks also to the MBI State Park for use of their beaches. The State Park and the MBIYC both had registration forms there. And a big thank you to Dave Larson of TMP Architecture for making and donating lots of photocopies for us!