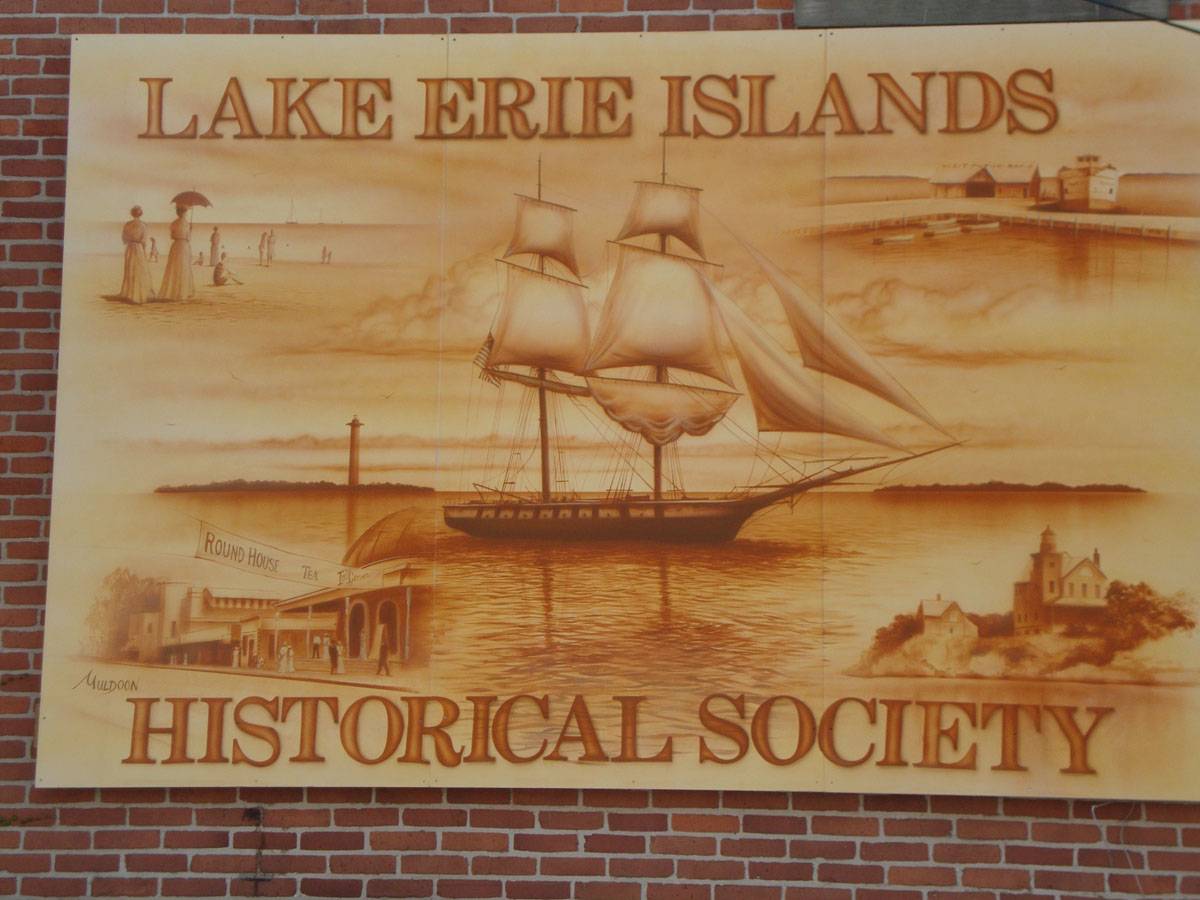 The Hotel Victory at Put-in-Bay, once gained fame as the largest hotel in the world (or at least the largest in America at the time).

Today it is nothing more than a few sad ruins tucked away behind an Ohio State Park campground on South Bass Island, plus memorabilia scattered throughout places like the Lake Erie Islands historical museum and the forgotten corners of various attics spread throughout the region.

Ottawa and Huron tribes lived in the Lake Erie Islands region prior to the late 1700s, but things began to change as the Connecticut Land Company deeded South Bass Island to John Pierpont Edwards in 1807, and his son John Stark Edwards settled the area and cleared 100 acres to raise a crop of wheat.

Settlement halted with the area’s prominent role in the War of 1812 as the site of a major victory over the British by Commodore Oliver Hazard Perry, but another Edwards son, Alfred, returned after the war to cut many of the island’s trees for timber during the 1830s and 1840s. The area remained sparsely settled until the 1850s, when Jose DeRivera purchased five of the islands and transformed South Bass Island into a fruit farm.

By the late 1870s and the 1880s, grapes became the island’s sole food crop and tourists began traveling to Put-in-Bay.

A few hotels popped up near the downtown steamer docks at Put-in-Bay, ranging from small hostelries like the 26-room Park Hotel to the 1000-room Put-in-Bay House.

Some of the early hotels were not large enough or luxurious enough to please the increasingly affluent crowd of tourists, and fire destroyed a couple of them, leaving Put-in-Bay with a decided shortage of hotel rooms by 1888.

J.K. Tillotson saw the situation as a great opportunity and began recruiting investors and selling stock in an ambitious plan to build a glorious hotel, named for Perry’s grand victory, in 1888.

The group soon ran into problems raising enough money to meet the planned summer opening in 1888, and moved the announced opening back to 1889.

Workers finally laid a cornerstone for the building on September 10, 1889 to coincide with the 76th anniversary of Perry’s victory over the British in 1813.

Prominent Toledo architect E.O.Falls designed a Queen Anne-style building with multiple dormers, towers and turrets, planning the hotel’s facade to create a favorable impression as tourists approached the hotel via steamer and could see the buildings from two miles away.

The Feick Construction Company of Sandusky continued working on the hotel through the next the next few years, and even as work continued very slowly as costs mounted, people remained optimistic about the hotel and believed in its potential to provide a real boon to Put-in-Bay’s tourism industry and the island economy in general.

Rumors persisted about the hotel project’s lack of economic viability as sales for lots to build small private cottages to surround the hotel faltered.

The hotel finally opened to great fanfare on July 29, 1892 even as some workers continued putting the finishing touches on some of the hotel’s interior.

The hotel consisted of a main building that had 625 guest rooms, 80 with a bath room. The building’s rectangular shape measured 600 feet wide by 300 feet deep and surrounded an inner courtyard. The building had three elevators, bell boy stations on each floor, steam heating and incandescent lights.

Another building connected to the main building housed the main dining room, a smaller dining area, kitchen and servant’s rooms. The two dining rooms could both serve up to 1,200 guests at one time.

Statistics held a strong fascination for consumers at the Hotel Victory opening, and the hotel owners listed some especially impressive stats regarding the construction of the hotel. The Hotel, at the time of its 1892 opening had:

The hotel and its opulent furnishings reportedly cost over $1 million dollars to put together, but the Hotel Victory supposedly failed to ever become a financial success.

Things may have looked great at the opening, but the hotel quickly got into financial trouble with creditors and the hotel went into receivership on September 19, 1892.

In 1893, the stock market crashed, causing a national financial panic and Hotel Victory again closed its doors on August 5, 1893.

The hotel lay empty and neglected for the next 18 months until a sheriff’s sale of furnishings stripped from the hotel, and the hotel itself occurred in 1895.

The company of the original architect, and the only bidder, purchased the building for $17,000. Another creditor purchased the furnishings for $7,000.

Hotel Victory, amazingly enough, opened again for business on July 20, 1896. A massive publicity push brought some new customers, and the hotel made an even bigger splash with the addition of a Natatorium, or swimming pool, in 1898.

The Natatorium was 30 feet wide and 100 feet long with a graduated depth of three to seven feet. Fresh lake water filled the pool, as women and men swam in the pool together, a rather scandalous development for the time.

Still, there were setbacks like a smallpox scare in 1898 causing the island to experience a brief quarantine as 26 employees of the hotel had the disease and the hotel again changed hands when Falls tired of dealing with the problems.

In 1899, brothers and hardware merchants C.W. and J.W Ryan, purchased the Hotel Victory and brought in Thomas McCreary as the hotel’s general manager.

The gregarious McCreary had a genius for promotion and being the “perfect host” and set about revitalizing the troubled hotel at the end of the 1899 season.

Visitors found a visibly revitalized and refreshed Hotel Victory as the 1900 season began.

McCreary became the longest-running manager at the Hotel Victory, which experienced the peak of its popularity and success during his 1899-1907 tenure.

McCreary met the challenge of getting customers into the doors with his unceasing publicity efforts that established the Hotel Victory as THE place to stay, making it worth the higher rates the hotel charged to meet its costs and offset the fact that it had a short season, and attracting conventions and meetings to supplement the usual crowd of tourists. He also touted the many activities, entertainments and safety measures taken to insure for the comfort and entertainment of guests.

McCreary also commissioned German sculptor Alfons Pelzer to create a 13-foot-tall winged Victory statue of copper and bronze (with a 7 foot wing span) to sit on a nine-foot-high pedestal front of the hotel in 1907. This landmark was, unfortunately, the last big project for McCreary at the hotel as he died later that year. The statue itself ended up going to a scrap metal drive years later during World War II.

The hotel’s glory days quickly faded as no one else could match McCreary when it came to managing the place and the hotel closed again in 1909. By 1911, a Chicago newspaper reported that neglect and decay caused the hotel to look like a “haunted” place.

Meanwhile, rumors had the hotel reopening or getting new ownership as a short-lived remodeling effort quickly halted because money was again a problem.

Flanders spent a reported $40,000 for the hotel and another $100,000 on remodeling it before opening it in 1918. The owners sought convention traffic and marketed the hotel as a great getaway for army and navy men on leave during World War I. Rooms cost $1.50 and up, and crowds started to arrive at the hotel again.

In 1919, a Chicago group headed by Charles J. Stoops purchased the hotel and obtained a $250,000 mortgage on it. Hopes ran high for the hotel in the face of a predicted post-war economic boom, but business was less than brisk and rumors of closure again surrounded the Hotel Victory.

The Hotel Victory had only 20 or 30 guests staying there on Thursday, August 14, 1919 when an alarm phoned into the hotel from outside alerted them to a fire that started on the third floor.

By 8:00 p.m., the fire began roaring through hallways and by 8:30 the Hotel Victory appeared doomed as flames engulfed the building and rose as high as 75 feet into the air.

The fire was too much for the tiny Put-in-Bay Fire Department, even with its then-new Ford chemical fire wagon and efforts to douse the flames by piping in water from Perry’s Cave.

Crowds gathered to watch the fire, which people reported seeing from as far away as Sandusky (22 miles to the east) and Detroit (62 miles to the west).

Fire fighters managed to confine the fire to the Hotel Victory building and seeing that all of the guests safely evacuated the building.

Thieves, meanwhile, stole many of the personal belongings left behind by fleeing guests, as well as many pieces of the hotel’s furnishings while the blaze raged for several days.

Damage to the hotel hit an estimated $500,000 to $1,000,000 and the rumor mill surrounding the Hotel Victory speculated that investors intentionally set the fire to get out from under mounting debts, but they suffered heavy financial losses and had little insurance coverage for them, to the more likely explanation that faulty electrical wiring caused the fire.

In any case, it was the end for Hotel Victory.

The site lay fallow and underdeveloped until the State of Ohio purchased 33 acres of property on the old Hotel Victory site at Stone’s Cove in 1938 to build a new public park. The park site became part of the Ohio State Park System in 1851.

I heard about the legend of the Hotel Victory and sought out the ruins at the campground.

We saw the stone pedestal where the winged victory statue once stood and viewed the ruins of the Natatorium from on top of the hill where the hotel once stood.

The campground has 125 non-electric campsites, ten full-service sites, flush toilets, showers, picnic tables, a fishing pier and a small beach. A far cry from the fancy amenities once enjoyed by Hotel Victory guests during its early 1900s heyday.

A couple of small signs mark the site of the hotel ruins, although no fancy marker exists to explain the hotel’s part in the history of South Bass Island and Put-in-Bay.

Campers in tents and RVs appeared pretty much oblivious to any ghosts of the Hotel Victory that might still be lingering at the site.