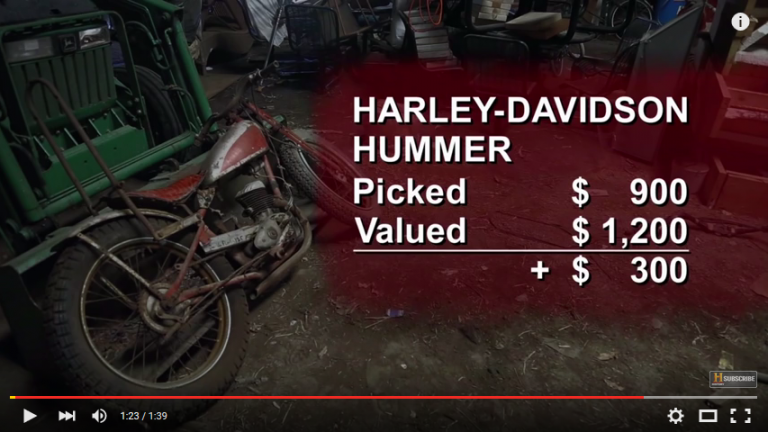 The Roeder family owned Tony’s Garage bar on the island for a few years when it was transitioning from Tony’s Place to the Reel Bar currently. They also have owned Harley dealerships over on the mainland.

Mike Wolfe and Frank Fritz, the professional duo, who scour the earth for antiques and treasures covered in rust and dirt as “American Pickers” for the History Channel were at the Roeder family home and business in September.

“It was pretty cool. They know their stuff,” said George Roeder, owner of the Monroeville motorcycle shop. “They tried to keep it quiet but people saw the truck and stopped. They were nice and signed autographs and took pictures.”

Roeder daughter Taaron had seen where American Pickers were coming to Ohio. She sent them a photo of a 1946 Harley Knucklehead motorcycle.

“I told them that was not for sale,” Roeder said.

But it got their attention and the show asked him to send them a list of what was for sale.

Wolfe, who owns Antique Archaeology, and Fritz are motorcycle enthusiasts themselves but on this episode were on a mission for a man named Jersey Jon to find motorcycle engine and gas tanks.

The duo looked at the Knucklehead but respected the Roeder family did not want to sell it.

They bought a 1913 engine and gas tank from George Roeder, as well as paying $300 for an old Harley Davidson shirt.

“They gave me a good deal,” Roeder said. “They will use the 1913 to finish a motorcycle. I can never get the time to get that done so I am happy to see it get completed.”

They visited George’s mom, Jessie, at the family home.

It was here they found and bought an old Harley Hummer motorcycle, as well as a couple other items.

The best part for the family is that the show honors the family patriarch George Roeder, George’s father, a champion motorcycle racer in the 50s and 60s before he opened Roeder Harley Davidson in 1972.

“They talk about him in the show,” George said.