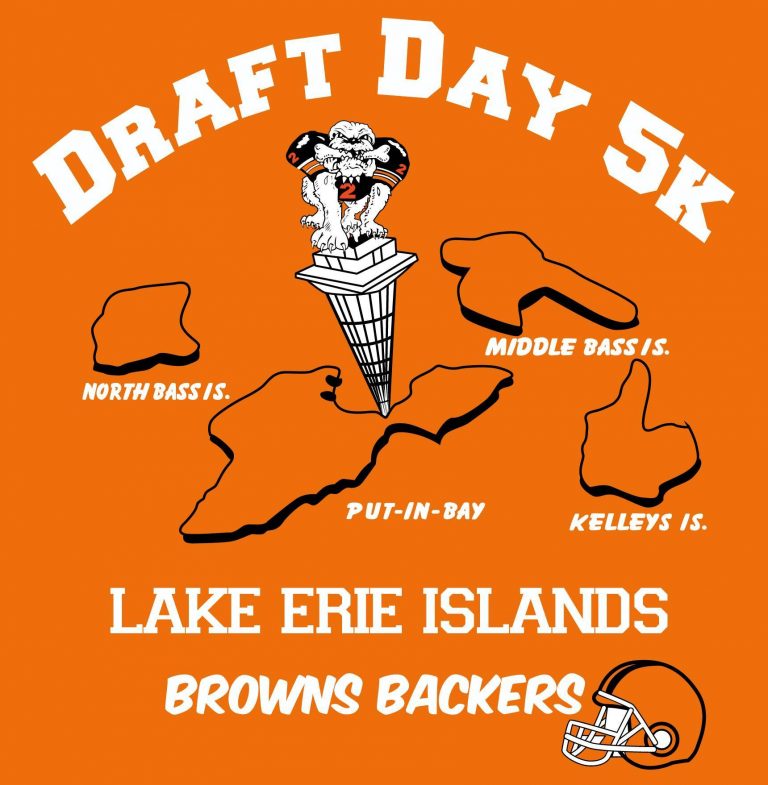 PUT-IN-BAY — The NFL Draft Day is now behind us and the Cleveland Browns are looking forward to a great rebuilding season with some top-notch draft picks! Put-in-Bay even has its own special group to cheer on and support the Browns. The Lake Erie Islands Browns Backers, headquarted on Put-in-Bay Ohio, spends all year raising money for the local community as well as cheering on the Browns.

This year’s fundraising started with the 2nd Annual Draft Day 5k on April 30th this past weekend. Every participant received an Official Draft Day 5k Jersey, free lunch, drink discounts, and tickets into a raffle for Cleveland Browns autographed footballs, framed and signed pictures and more! This event benefited the Lake Erie Islands Browns Backers and everyone’s support of this race was greatly appreciated as all proceeds from the race will go directly to the Lake Erie Islands Browns Backers.

The main events are usually held at the club’s official headquarters, Tippers Restaurant & Lounge. The club was named 2007 Club of the Year by the Cleveland Browns as well as being club of the month numerous times.

The club’s biggest fundraiser, the Lake Erie Islands Browns Backers Rib Burn Off, was held for many many years at Put-in-Bay. Featured celebrities who participated include: The Bone Lady, Big Dawg, Mobile Dawg, Charlies Fryes, and The Brownie Elf. This event always had live music, Browns players, and some of the best ribs on the island competing for the coveted first prize.

Tailgate parties are planned every Sunday during football season. So get ready to kick back and enjoy a few drinks with some friends as you watch you favorite team at some of the islands best bars and restaurants. Island businesses will have their establishments decorated with their favorite team colors and theme on the special “Tailgate Weekend”. Our club will be at our home bar, Tippers, on Saturday September 28 selling special event t-shirts, 50/50 raffle and game board squares.

For the past few years, the club has maintained its own scholarship for the local high school with $1,000 going to one student for their first year of college.

Since its inception in 2001, the Lake Erie Islands Browns Backers has been dedicated to supporting the local community and the love of the Browns.

Good luck to the Cleveland Browns this coming season and good luck with their 14 new draft picks:

After a long day of running on the island, some rest will be in order. Reserving a Put-in-Bay Cabin is a great respite.  Here, the comforts of home beckon guests to relax and unwind.  So, set the watches to island time and watch the worries fade away. Besides, with so much to do on the island, you may want to spend and extra night so you can get the full island experience! Make sure you book fast because weekends tend to fill up fast in the summer. The sooner you book, the sooner you can get on a Put in Bay ferry!