Bash On The Bay Concert 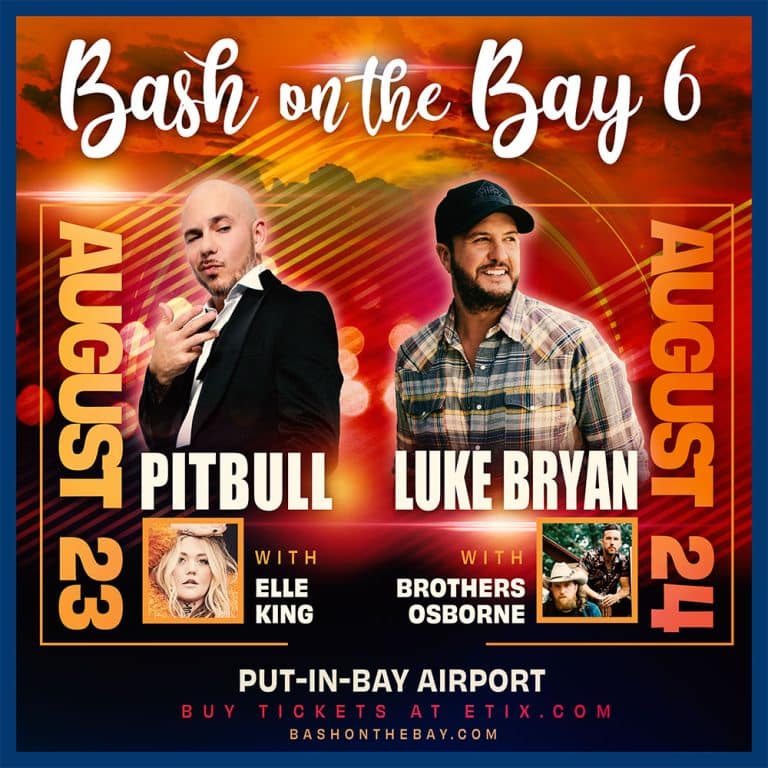 6th Annual Bash on the Bay

For places to stay, check out our top picks!

We are excited to announce the  Annual Put in Bay Bash on the Bay! Guests will be entertained by a massive country concert that will be held at the Put in Bay airport.  As you will see, this year the event has been extended to two days. The additional day was added due to the demand for the line-up and the popularity of the performers this year.This is going to be an event to remember!

The two headlining acts have been signed and finalized for their Put-in-Bay appearances. Luke Bryan and Pitbull will be rocking the Bay in 2023!!!! If you were one of the 10,000 concertgoers we hosted for Kid Rock in 2019, then you know that this is the event of the season and should not be missed! Bash on the Bay 2023 is going to be the best yet! You can visit the official Bash on the Bay website at: bashonthebay.com

In 2019, Kid Rock headlined the concert to a sold-out crowd alongside Uncle Kracker. The Put-in-Bay ferries (The Jet Express and Miller Ferry) did an incredible job safely carrying our concertgoers to and from the island. Guests also arrived on boats Catawba Island, Toledo, Port Clinton, and even Cleveland.  As the popularity of this event has grown each year, Put in Bay Lodging, home rentals, hotels & resorts quickly sold out. If you’re planning this event for your group, be sure to book your lodging accommodations as soon as possible.

While you’re visiting the island, be sure to rent a golf cart and explore by the day before you prepare to party all night. Whether you’re a first time visitor or a seasoned Put-in-Bay island veteran who visits each year, you’re in for a great time on the island!

Bash on the Bay History

For the last 7 years, the island has organized its own music festival at the Put-in-Bay Airport. The Put-in-Bay music festival called Bash on the Bay caused thousands of people from all over the United States to visit the island. The first one was headlined by Toby Keith in 2017. Rascal Flatts’ Put-in-Bay debut came in 2018, and 2019 saw 21x platinum recording artist and entertainer Kid Rock! 2020 would have seen Blake Shelton and Keith Urban playing a two-night concert, but due to Covid-19 it was cancelled. So they came in 2021 instead and put on one hell of a show! Zac Brown Band and Brad Paisley were the most recent performers in 2022

2019’s Bash on The Bay saw hundreds of boaters dock their boats in the downtown harbor and head to the festival. All of the Put-in-Bay Taxis on the island were running nonstop all day long. Bash on the Bay is the Island’s busiest weekend of the year. As a result, Put-in-Bay lodging books up well in advance so plan ahead!

South Bass Island is also home to local performers who have been playing the island for so long they’ve become famous in their own right. People from all around the country know of Bob Gatewood, Pat Daily, Ray Fogg and Mike “Mad Dog” Adams thanks to their times on the island. Put-in-Bay entertainers often head down south in the winter to play their Put-in-Bay classics in places like Key West!

Put-in-Bay offers so much more than this music festival.  The island offers events for guests of all ages.  Read more about Put-in-Bay events on our events page!

How far in advance should I make reservations to stay on the island for this event?

Each of the last four Bash on the Bay events has grown in popularity which means the home rentals and hotels & resorts book quickly. We recommend making your reservations as early as possible in order to ensure that your group reserves the accommodations that you desire.

When will we know the line-up for the concert?