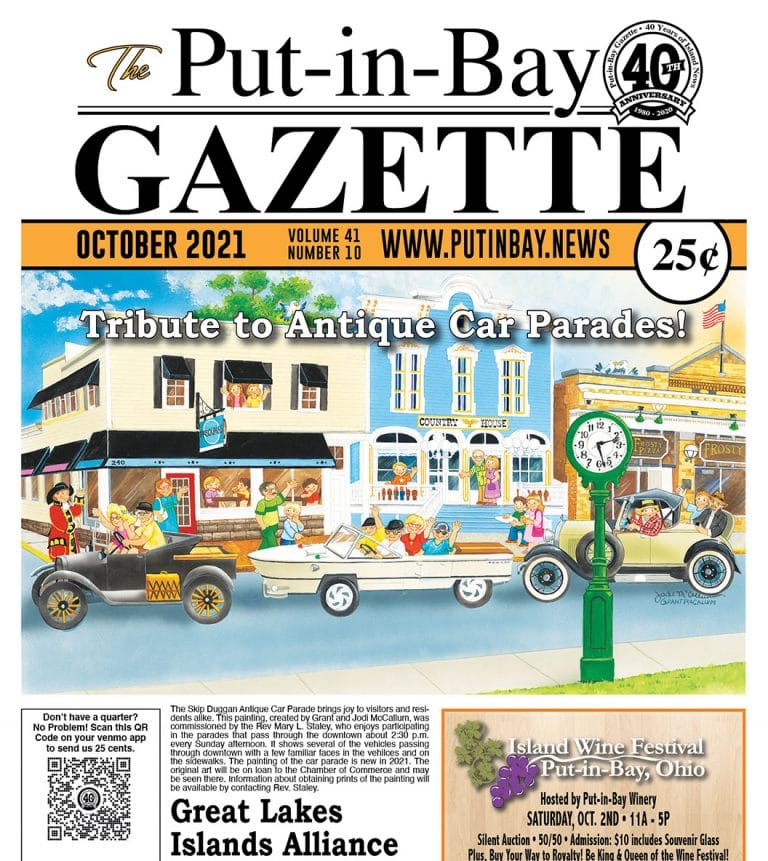 Put-in-Bay Running Club meets every Sunday at 10 a.m. at DeRivera Park Gazebo for a 3-mile run. Runners and walkers of all speeds welcome!

A huge THANK YOU to Jim Linter from Miller Marina! He’s removed the tree on the Resale building after that big storm.

Dale Burris says the Concord grapes that the North Bass folks grow are the best in a decade. There are three rows, and they are about a ton to the row this year.

Jackie Taylor tells us she was concerned about the Monarch butterflies migrating through the islands on their way from Canada to Mexico this past month. With the border closed to Canadians due to Covid, she thought they might not be allowed to cross the lake this season. The good news is that they made it across.

The Cleveland Boat Show will be back at IX Center in January from the 13th thru the 17th.

In September, Opera News posted in Ohio Attractions on the Internet called Put-In-Bay “One Of The Best Small Town Vacations In America.”

Roger Parker cleaned tables at the PIBVFD clambake on September 18th and never bussed a single table because everyone cleaned up after themselves. Everyone also raved about how good the food was this year.

That last storm did a number on trees in the island park preserves. Thanks go to Roger Parker for cleaning up a fallen tree in the Cooper’s Woods Preserve. PIB Twp. employee Chris Helman cleaned up damage at the Middle Island East Point Preserve. Thanks guys for keeping our walks in the woods possible!

The Monument Visitor Center will be open on Fridays to Mondays until October 18th. Hours are 10 a.m. to 5 p.m.

Jason Buttrey and Amanda Singh are the new owners of the Subway in the lobby at Commodore Resorts.