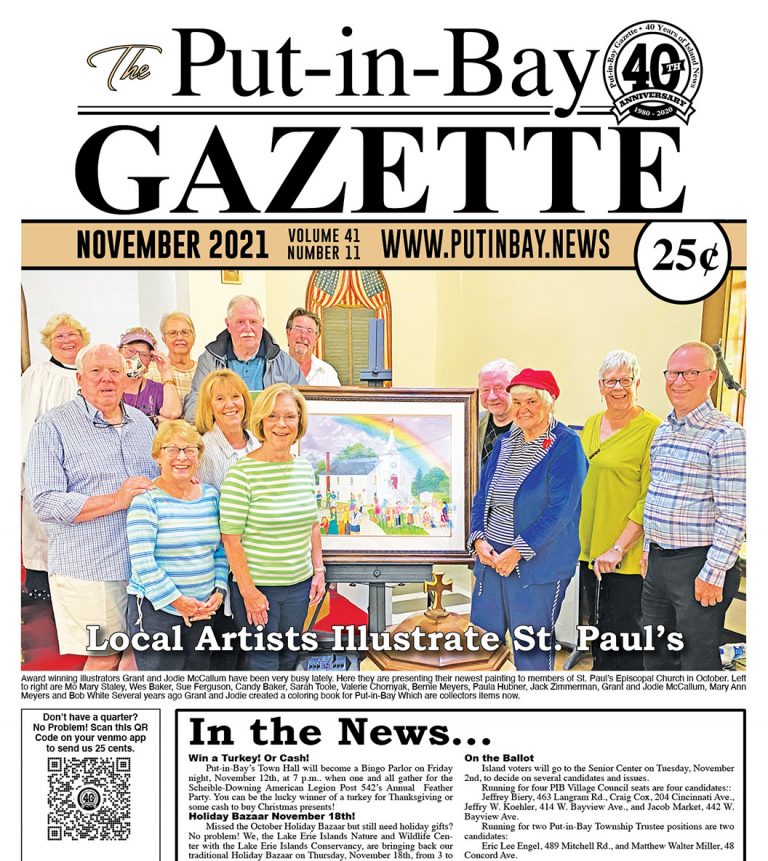 The original part of Put-in-Bay School, the brick structure facing Catawba Ave., was completed in 1921, 100 years ago.

Thank you so much to the Reel Bar for raising money for island charities!! The island is so grateful for the support! For the 8th year in a row, Reel Bar customers had their names painted on Reel Bar stools in return for a contribution to island charities. This year they raised $3,100 for the Historical Society, Fire Dept., Lake Erie Conservancy and the Nature & Wildlife Center.

Bill Krejci is currently in the final phases of writing a book called “Lost Put-in-Bay,” which will be released late next spring through The History Press.

We had to laugh when we saw a video on social media of golf carts parked on Delaware Ave. one rainy night. Someone had walked along and turned every left turn signal on so they were all on at the same time. The flashing red lights reflecting off the wet pavement was rather beautiful.

We’re hearing that the popular North Bass golf cart tour sponsored by the Lake Erie Islands Historical Society is back on for 2022. A date in June, rather than August, is starting to take shape.

The Forge has announced that they will be open this winter.

There will be a little remodeling at the Put-in-Bay Chamber of Commerce office over the winter. New paint for the lobby and one office are on the agenda. Look for a ribbon cutting ceremony in spring 2022.

Have you noticed very many fall colors yet? The peak foliage has been delayed again this year due to above average temperatures in September and more importantly in October. There were more leaves on the trees than on the ground at Halloween, but peak colors for the island are November 1st through 7th.

Laureen Mooney tells us she was the one who thought they should play “spin the bottle” at Game Night at the Yacht Club. Her suggestion was apparently ignored and only card and board games were played instead.

One of the celebrities to visit the island this season was the actor in the Skittles commercial, Jimmy Bellinger.

Jason Cooper from Island Hardware is certainly following in the footsteps of his grandfather, Pinky Allan, and his father, Tom Cooper. He is now a Trustee of Put-in-Bay Yacht Club. Congratulations, Jason!

The Island’s Cigar aficionado, Richard Warren, and Ed Hubner from Put-in-Bay Rd. were off island over the Oktoberfest Weekend attending Operation Pumpkin (aka Giant Pumpkin Growers Association Festival) in Hamilton, OH. The two came home with cash prizes for their entries grown on PiB, plus Richard had a very successful weekend selling his cigars. Ed’s giant squash placed 4th for $400. Richard’s squash placed 3rd and his pumpkin placed in the money, too, for a total of $575.

Cudos to PIBPD Officer Mike Wheeler who has been seen interacting with the staff and island youngsters outside the front of school when they arrive in the morning, rather than just sitting inside the tinted-window patrol car parked across the street on Doller Ave.

When Facebook went down on Monday, October 4th, many islanders had to revert to the old “island grapevine” to get their daily dose of island news and gossip.

Billy Market had his hands full scheduling all the asphalt truck trips on the ferry this past month. Loads were coming to Put-in-Bay for the Catawba Ave. repaving project and to Middle Bass for repaving at the airport there. While islanders were sleeping, the ferries were hauling the hundreds of tons of the black stuff to Middle Bass