Lonz Winery on Middle Bass Island reopens to the public! 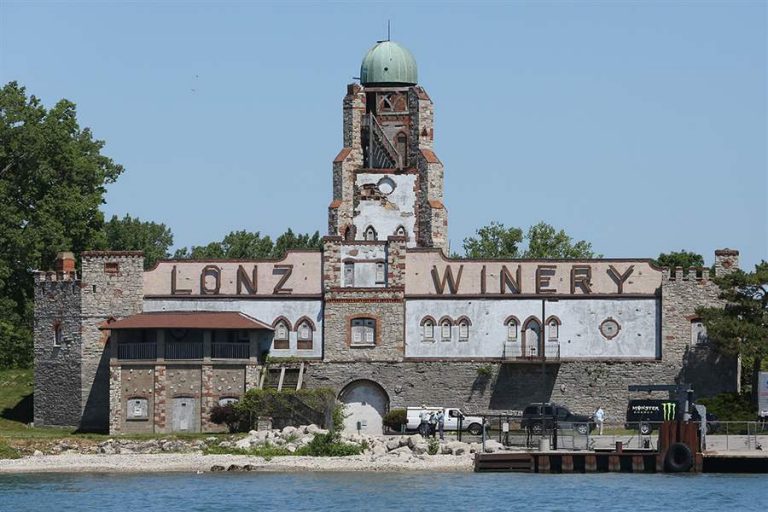 The Ohio Department of Natural Resources on Friday hosted a grand opening celebration at the park, accessible by ferry from Catawba Island. The event ran all afternoon, and there was a great turnout from the general public who was invited. The state completed work this spring on the historic winery, which dates back to the late 19th century. The iconic Lonz tower, built in the 1930s and easily seen from approaching boats, has been restored, as has the main building facade. The building, however, has been converted into an open-air plaza.

Five wine cellars have been restored, as well as has the winery’s former press house. The state is in talks with possible vendors interested in serving food and/or wine in the press house. Although that may not happen until next year. Access to Middle Bass Island is via the Miller Ferry, which offers regular service from Catawba Island on the Ohio mainland, just east of Port Clinton. The Middle Bass Ferry provides transportation between Middle Bass and nearby Put-in-Bay.

The state purchased the former winery in 2001, a year after a porch collapsed on the property, killing one man and injuring 75. For years, the property sat vacant and deteriorating, the state unable to afford its restoration. In 2014, the Ohio Legislature set aside $88 million for park improvements – and the former Lonz property was on the top of the state’s do-to list. Cost of the Lonz renovation is $5.7 million, according to Santiana.

A cement terrace loaded with tourists collapsed at an island winery in Lake Erie Saturday afternoon, killing two people and injuring dozens, authorities said. The collapse left a gaping hole in the floor of the lakefront terrace at Lonz Winery’s century-old main building, a fortresslike mansion on the National Register of Historic Places.

The floor’s rubble fell 20 to 30 feet into an unoccupied wine cellar, authorities said. The floor apparently collapsed under the weight of the 80 to 100 people on it. Two of the victims were confirmed deadand an estimated 30 people were critically injured.

Lonz wines, now part of a corporation bearing its name, continue to be made by enologist Claudio Salvador. Born in Italy, where he received his education and experience in the art of winemaking, Claudio has been making the signature Lonz wines since 1979. Combining his knowledge of wine making, continuing research, meticulous vinification, and creative effort, he has produced a new class of Lonz wines that are winning national awards. The same pride, the same determination and the same standards set by Andrew Wehrle and George Lonz continue today as we expand and improve on the fine wines bearing the Lonz name.