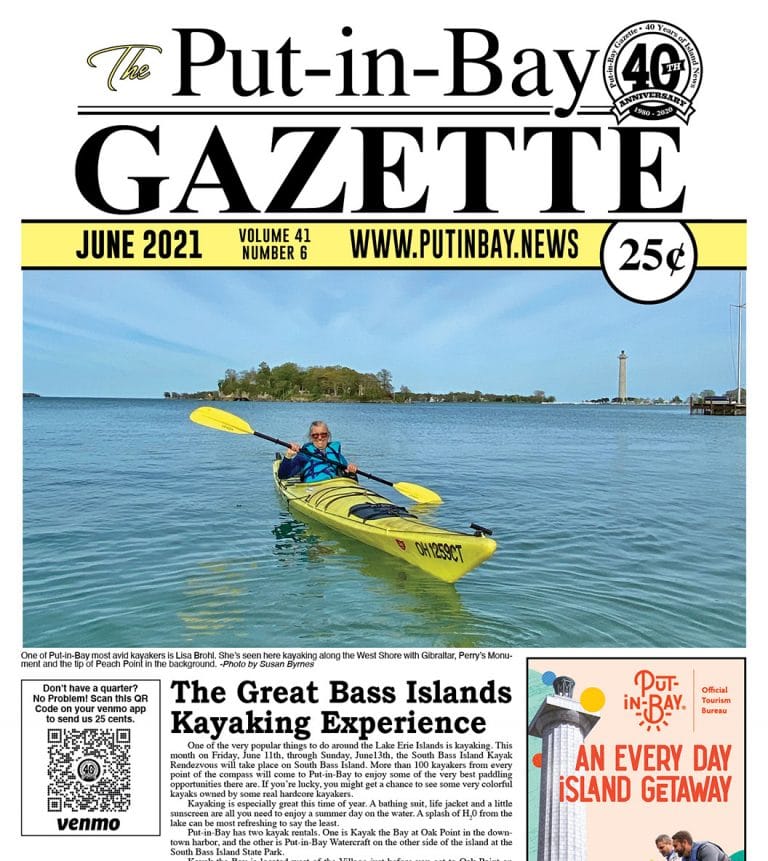 USA TODAY recently listed Put-in-Bay in their “10 Best Island Escapes You Can Drive To” post on the Internet.

Chris and Joy Cooper recently installed an 85-foot long zip line for their kids that they got as a gift.

Gerry Baumert, the husband of Marsha from the Resale Shop, builds model airplanes in his spare time.

Michala Wertenbach, PIBHS Class of 2011, made some beautiful and delicious cookies for the this year’s graduates at the PIBHS graduation ceremony.

Louise Titchener from Shore Villas is excited to announce that the first novel in her Oliver Redcastle series, Gunshy, is now an audiobook, and that it’s available on Amazon and Audible. Check it out.

Did you know Carl and Chris Krueger from the Put-in-Bay Brewing Company are celebrating 25 years of brewing at the bay?

Plan now for the Fireworks over the Bay on July 4th!

Speaking of fire, did you know the the volunteers at the PIB Vol. Fire Dept. get a few bucks when they show up for a call, but are paid nothing for all the training and drill hours they have to have?

On one recent day at their South Bass Island bird banding station, banders banded 101 birds of 19 species, plus they recaptured a red-winged blackbird that was originally banded as a second year bird in 2016 at their Middle Bass Island East Point Preserve banding station.

Robin Burris Cadez posted an interesting comment on social media, saying North Bass Island has no place to spend money other than the church’s donation jar.

We’re getting concerned that the cicada and Mayflies might show up on the island at the same time. If they do, it should be interesting.

There was no Put-in-Bay High School Alumni Banquet this year due to continuing Covid concerns.

Dan Skoufos, longtime island resident, has sold his home on Put-in-Bay Rd. and has moved to Missouri. Dan, who retired from the Monument maintenance department and was Commander for the island’s American Legion Post, will be missed.

The Library is looking for volunteers to assist us with our monthly “Sidewalk Book Sales.” Let them know if you would be willing to help.

The Butterfly House is a 4,000-square-foot aviary at Perry’s Cave Family Fun Center. It’s home to hundreds of butterflies, including a variety of more than 50 different exotic species.

The US Brig Niagara will not be making any scheduled trips to Put-in-Bay for the 2021 season. They are hoping to be able to visit once again in 2022.

Happy retirement wishes go out to Lorraine Zimmerman, who recently retired from full time at Zimmerman Paint. Lorraine and her husband Jack have a cottage at the PIB Airport and are the ones who do the street striping for the Village.

Put-in-Bay made a list on the internet called “8 Charming Small Towns On Lake Erie In Ohio.”

After the Memorial Day Friday storm, boaters should be especially on the lookout for debris washed into the lake. Hitting a downed tree, logs, dock boards plus other items that floated from shore can cause some dangerous accidents if hit while underway.

Would you be interested in sponsoring a book on the Put-in-Bay StoryWalk Trail? Stop by the library for details.