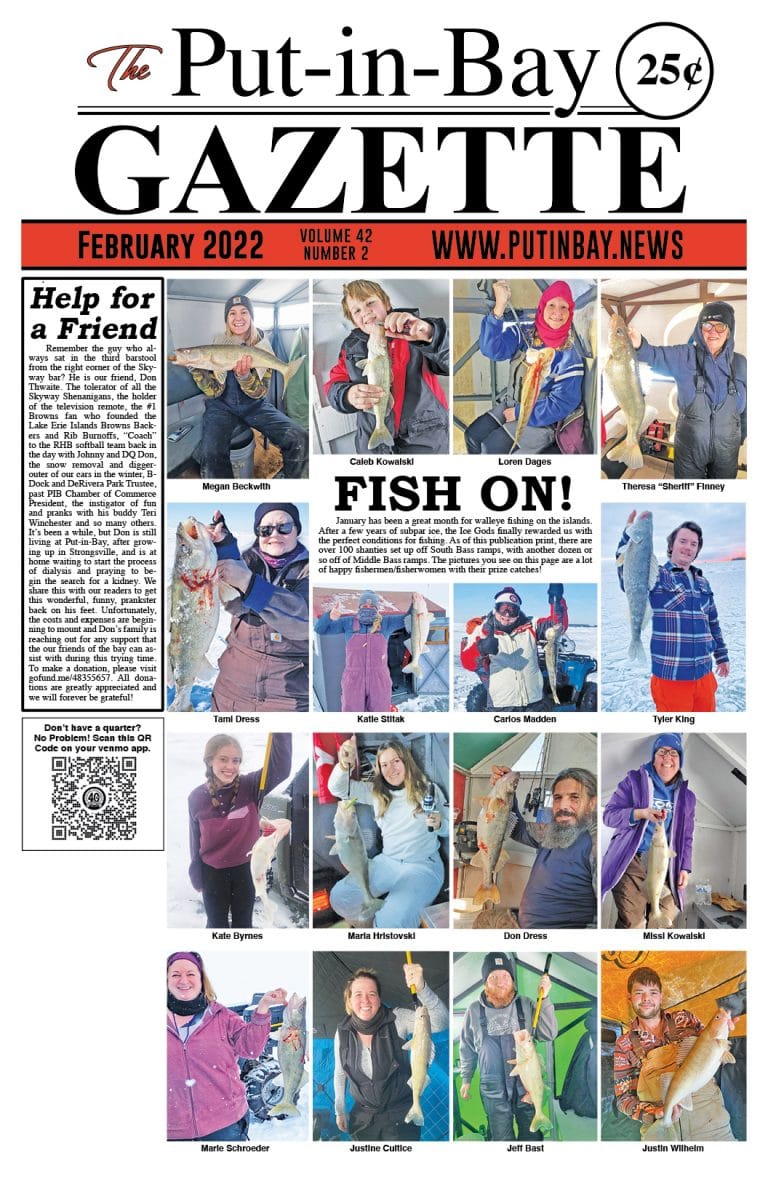 The Lake Erie Islands Count Circle of the Audubon Christmas Bird Count was held on December 19th, 2021 with people participating on Middle Bass, South Bass, Kelleys and Pelee Island. This was the 122nd year for the annual Audubon Christmas Count, making it one of the oldest citizen science efforts. Having years of data at the same time of year allows the tracking of trends in bird populations. And it is a lot of fun to participate! Nice to spend the day walking the island or watching birds at your feeder for a good cause. Thanks to all who helped out!

It was a relatively warm day again this year with open water around the islands. Duck hunters were present offshore at South Bass, Middle Bass and Kelleys Island which affected the count of waterfowl. The warmer weather made for a quieter count both in the woods and at feeders. Total for all four islands together was 73 species and 19,804 individual birds counted.

Here on South Bass Island, we counted 2,651 birds from dawn to dusk. Lisa Brohl, Bobbie Dunn, Bill Linden and Elizabeth Heineman drove and walked around the island to tally waterfowl and land birds. The most numerous birds again were waterfowl-with 481 red-breasted mergansers, followed by 430 bufflehead. Elizabeth Heineman found a belted kingfisher and great-blue heron at the pond. A nice surprise was a pocket of golden-crowned kinglets on East Point with Bobbie and Bill-a new bird for them. Lisa found five double-crested cormorants near Gibraltar. The great blue heron, belted kingfisher, and double-crested cormorants seem to be spending the winter feeding at small patches of open water under the bridge to the pond and at bubbler systems at docks.

Russ Brohl, Kit Knaser, Ruth Scarpelli, Michelle Heinemen, Sarah Toole, Pam Stephens, Jean Hilt, Maryann and Anita McCann, Julene Market, Randi Wertenbach, Paul Ladd and Gay Pippert, Janet Grantham, Sue Ferguson, Walt Duff and Jim O’Donnell each watched their feeders and yards that day to record the birds and woodpeckers who came to visit. Randi Wertenbach had over twenty mourning doves visit her feeder that day. Kit Knaser and Russ Brohl had a tufted titmouse each at their feeders and Elizabeth heard one near the pond. These are rare here on the islands.

Paul Ladd gave Lisa Brohl, Susan Byrnes and Julene Market a ride to Green Island in an outboard on December 21st to count birds there. We had received a special permit for access that week. A great horned owl was seen there as well as several duck pieces that the owl may have been enjoying. Again there were not many ducks as we saw a couple of duck boats while out.

On Middle Bass, Brian McClain walked and drove the island with assistance from Teddi Keith Morris to tally a total of 886 birds with the most numerous birds being Red-breasted Mergansers at 125. Brian found a hairy woodpecker-rare for island counts-as well as the only common grackle recorded on the Bass Islands during the count. Brian also recorded large numbers of white-throated sparrows and some winter wrens.

Pelee Island got wild turkeys, ring-necked pheasants, horned larks, eastern bluebirds and lots of mourning doves thanks to all the field and forested habitat there. They found the only eastern phoebe and the only island with high numbers of American tree sparrows. Pelee’s most numerous birds were the large rafts of scaup at 5,906 and had pintail, green winged teal, gadwall, ring-necked ducks and swans which did not experience the duck hunting pressure of the other islands. Participating in this year’s count were Paul Carter, Graeme Gibson, Brian and Lisa Kipp, Sumiko Onishi, Michelle Taylor, Vernon Taylor, Lynn and Ron Tiessen, Rob Tymstra, and Bernie Van Donk.

The observers at Kelleys found a merlin, red-necked grebe, common loons, saw-whet owls, turkey vultures and lots of white-throated sparrows. Other good finds were purple finches, count week red-winged blackbird, and Thayer’s Gull. At Kelleys, the most numerous bird was the red-breasted mergansers followed by scaup and bufflehead with a single pintail and a few gadwall and ring-necked ducks too. There were not as high numbers of waterfowl with hunting pressure and open water everywhere-ducks had not been forced south yet. Participants were John Pogacnik, Alexi Panehal, Tom and Paula Bartlett, Emily Beal, Kari Warner and Chris Ashley.

Final results and species counts will be posted on the Lake Erie Islands Conservancy website at www.lakeerieislandsconservancy.org once approved by Lake Erie Island Count Circle coordinator John Pogacnik. Thanks to everyone for participating.