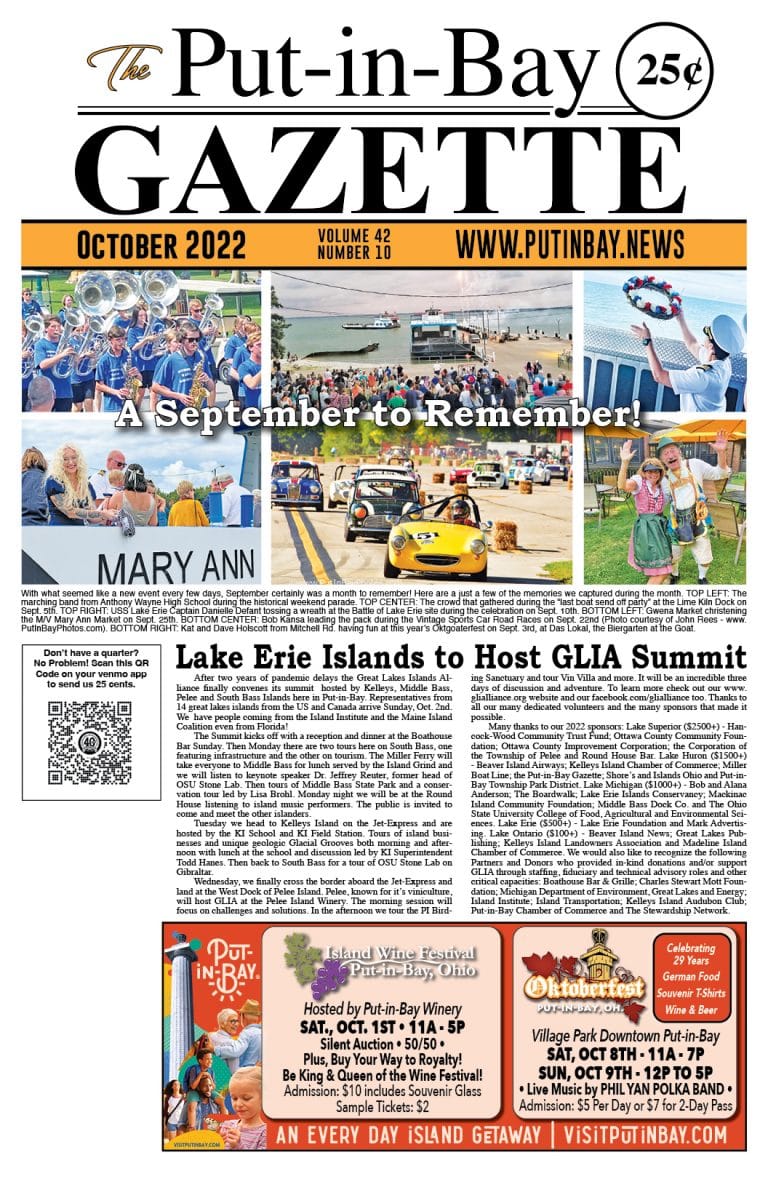 Jackie Taylor from East Point had fun running in the Toledo Turkey Trot with nearly 3,000 other participants. She came in 695th place overall and 23rd out of 175 awesome women in her age group.
Chad Hughes tells us the Island General Store will be open all winter.
Wishing everyone a blessed and Merry Christmas with family and friends, from the PIB Garden Club! Kathy Schrader, President
What advice would you give someone who wants to live on one of the Lake Erie Islands year round? Email your advice to pibgazette@frontier.com.
Kudos to Martin Ketchem, from Mikes Dr. on East Point, who had another haunted walkthrough at his home on Halloween. It was a real winner!
According to the most recent U.S. Census, there are 813 residents in Put-in-Bay Township and 210 households. In the village, there are 154 residents and 23 households.
If you’re fondly remembering Christmas pasts here on Put-in-Bay, you may remember when students at PIB School had a live Christmas tree sale and the trees were brought over to the island on Cantankerus.
We’re happy to hear Missi Kowalski, PIBHS’s science teacher, is recovering nicely after having a kidney removed.
If you’re eligible, Dave Frederick tells us the American Legion Post #542 at Put-in-Bay is looking for new members. The Legion is dedicated to veteran programs and public service. The only requirement to join is that you served in the military.
From Pelee Island, a recent post on social media read, “Anyone missing an Amazon package, please call the Pelee Terminal at 519-724-2115 and identify the item. It came with no name and no Pelee address or phone number.” As you can see, that’s what’s bad about not having home delivery on any of the Lake Erie Islands.
Speaking of packages, watch Rudy Cooks’ Youtube video called “The Package.” It’s about getting an Amazon package here on the islands.

Now that the slow winter season has come, some island folks are wondering why they can drive in both directions down Delaware Ave.
The newest EMT at the Put-in-Bay EMS is Lucas Guy! Lucas attended the EMT course held last winter on the island. Lucas is a local musician who plays at several venues on the Erie Islands. He also recently married Renee from the Nature and Wildlife Center.
Major Christian Wilson, PIBHS Class of 1997, recently retired from the Air Force after twenty years of service. He had eight tours in the Middle East and thankfully returned home safe each time. God Bless!
The Township has informed the Village that as of their November meeting, they voted to move forward with the Sheriff’s Department for police protection rather than go with the Village. No contract has been signed yet. What do you think? Email us as pibgazette@frontiercom with your comments.
The Boardwalk’s Shrimp & Lobster Bloody Mary Mix and Hot Sauce make great hostess gifts, stocking stuffers and gifts for those who love Put-in-Bay!! You can order online at
https://boardwalk-family-restaurants.myshopify.com .