May 2022 Gazette – Port Authority: An Open Letter to the Community 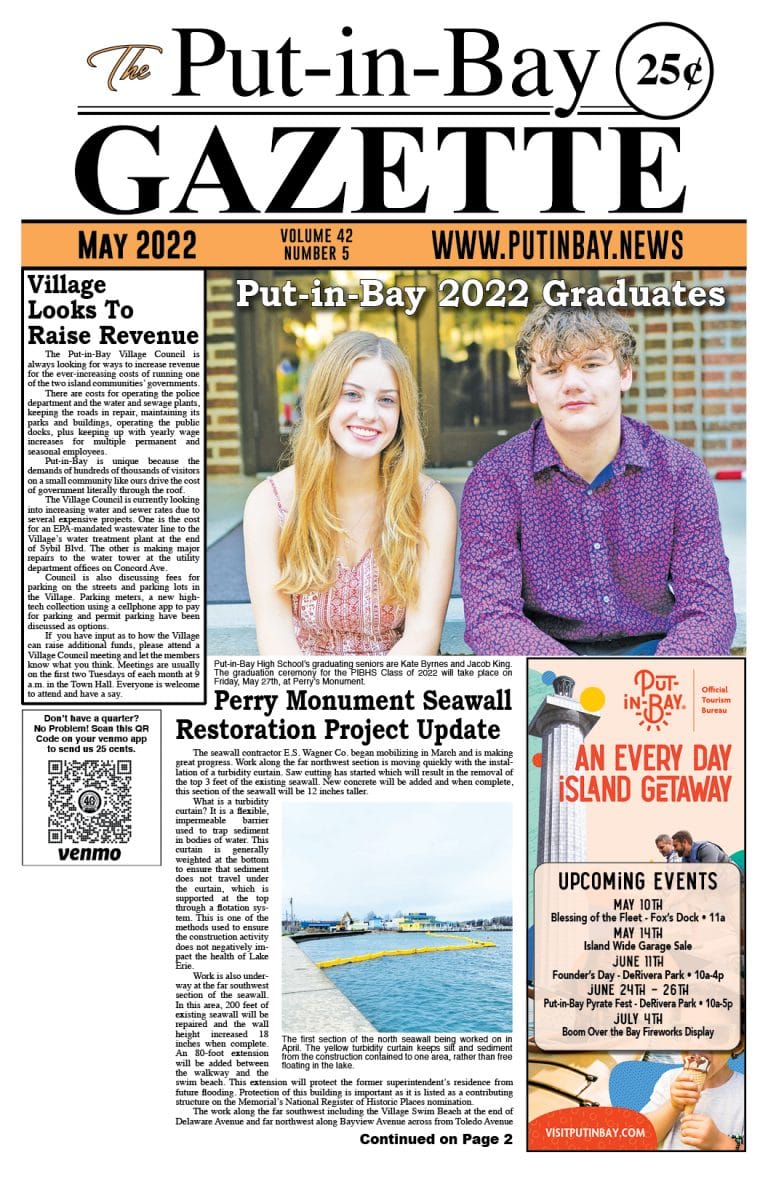 The Put-in-Bay Township Port Authority has been working diligently to support the residents’ needs and to enhance the island experience for visitors. The Port Authority’s mandate and focus is providing year-round access to the islands that is safe and user-friendly. Many efforts are underway to ensure the islands remain a preferred destination for those that live, work, and play here. Our facilities maintain an important connection with the mainland to provide for the services, resources, and programs that the islanders depend on.

The Put-in-Bay Township Port Authority was formed in 1991 with the purpose to preserve and promote the existence of the airports and seaports of the three Bass Islands (South Bass, Middle Bass and North Bass). The Port Authority is the governmental body which oversees the operation and maintenance of the township’s three airports and harbor mooring buoys. The Put-in-Bay Township Port Authority board is appointed by the Township Trustees, and includes Chairman Rick Ziebarth, Vice Chairman Robert Stausmire, and board members Chris Ladd, Mark Friebel and Lorna Strayer. Rosann Keiser coordinates the business functions as secretary of the Port Authority.

Since the early 1990s the Port Authority has worked to obtain federal and state funding for the construction and maintenance of these important township assets. Federal and state grants have provided millions of dollars of infrastructure improvements for the island communities. These grants typically pay for 90-95% of improvements with local matches covering the remainder.

Local sources of our funding include user fees, airport rent, special event revenues (such as the Bash on the Bay concert and the Put-in-Bay Road Race), and the local property tax levy. It is important to note that the Port Authority carefully reviews the fee structure related to the airport and harbor use and is mindful that these fees are passed on to the users of our facilities. The Board is committed to minimizing the financial burden on the users while providing continued improvements to the infrastructure and services used by the community.

The Board is currently evaluating and pursuing the building of a new terminal at the Put-in-Bay Airport. The current terminal was built over 50 years ago and now fails to meet important community needs for space, plus the foundation is in need of repair. Renovation to add additional space, address foundation and infrastructure deficits and to become handicap compliant is more expensive than redesigning and rebuilding the terminal.

This project will consist of demolition of the existing terminal building and construction of a new 2500-square foot passenger terminal building that will include six spaces: a public area, administrative office space, a mechanical room, men’s and women’s restrooms and a baggage/freight room. Additional project components include sitework such as sidewalks around the terminal, reconstruction of the areas of vehicle parking lot affected by demolition of the existing terminal, an access road from landside to airside and any necessary adjustments needed to provide positive drainage away from the terminal. The Board will utilize grant assistance from the Federal Aviation Administration’s Airport Improvement Program (AIP), FAA Bipartisan Infrastructure Law (BIL) and Ohio Department of Transportation (ODOT) for funding a majority of the project. The Aviation Consultant Firm assisting with the project is C & S Companies.

The project timeline proceeds from the initiation of the design phase in April 2022 and we hope to have this complete in the fall contingent upon approval of grant funding. The project could be ready for construction as early as Fall 2023. The Port Authority Board has a long history of tackling complicated, multiple-stage projects for the betterment of our infrastructure. It is a priority of the Port Authority to provide needed access to the mainland and its important resources.

The Port Authority Board completed an update to the Master Plan in 2015 for the Put-in-Bay Airport. With the assistance of our aviation consultant, we were able to update obstruction, future hangar development, aircraft parking and pavement marking.

Over the years, the Port Authority has obtained federal funding for the improvement and maintenance of the runways and ramp areas for all three airports to provide for the continued safe access to the islands.

The Put-in-Bay Port Authority welcomes all questions, comments, and concerns regarding the many projects we oversee. We can be contacted at 419-285-3371 or pibtportauthority@frontier.com. Monthly board meetings are open to the public and the meeting schedule is posted online, at the Post Office and at the Township Building. As we consider this next major project, we invite you to share your ideas and feedback about the new Put-in-Bay Airport terminal.