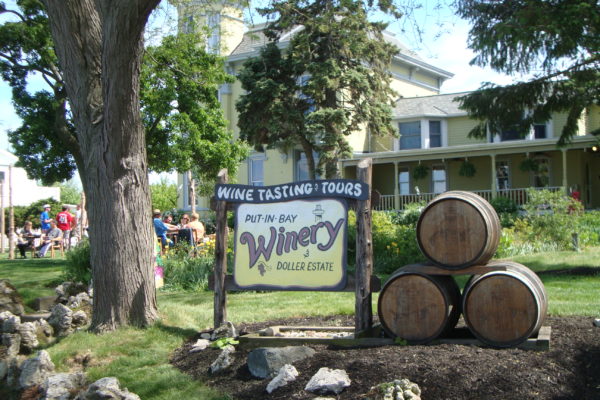 Put-In-Bay Winery, located in Put-in-Bay, Ohio between Sandusky and Toledo just north of Port Clinton, opened its doors for visitors on South Bass Island in May 2009. Visitors from nearby Midwestern states, southern Ontario Canada, and around the world come to visit our winery exhibit.

The winery exhibit, which follows the grape fruit from the moment the seed enters the ground, through its journey to the bottle, completes itself in a spectacular wine tasting room and gift shop with lots of goodies for purchase. Visitors can sample local island wines and varietals grown around the region, finding delicious new choices and new favorites. Enjoy a glass of wine while relaxing in our wine garden or on the front porch of the Doller House Estate with its wonderful view of the Put-In-Bay harbor. read more 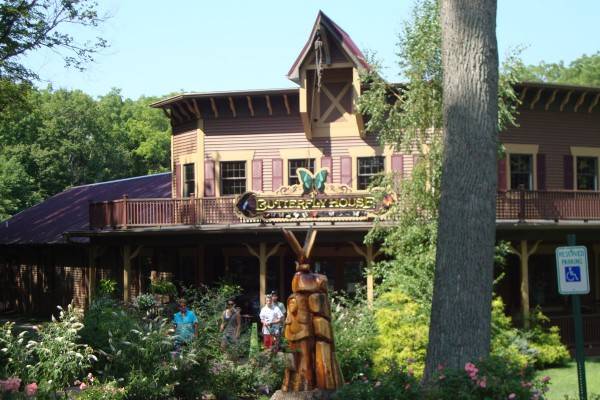 Since 2004, the Butterfly House at Put-in-Bay has been an enjoyable family attraction for many visitors. The location is within the Perry’s Cave and Family Fun Center, which boasts several other notable attractions such as Gem Stone Mining and the War of 18 Holes Miniature Golf Course. Guests can stroll around the over 4000 sq. ft. space, while in the midst of hundreds of butterflies. There are pathways and secret passages in the garden that are sure to delight kids of all ages. Over 50 species of butterflies from all around the world grace this majestic space. Additionally, there is a gift shop that features figurines, jewelry, garden items and more butterfly inspired items. Also, butterfly specimens in glass and other lovely nature inspired items are available for your perusal. Take home a memento to commemorate your stroll through this unique island offering! read more 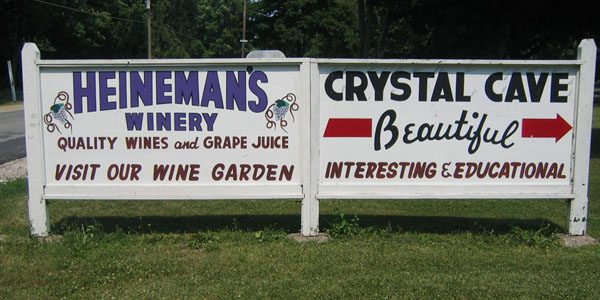 The Crystal Cave Gift Shop has spelunking and wine inspired gifts.  Inside, browse among the many varieties of Put-in-Bay wine.  Pick out a unique here from their eclectic selection.

This shop is located within Heineman’s Winery.  Heineman’s was founded in 1888 by Gustav Heineman.  He immigrated to the United States from Germany and settled on Put-in-Bay.  Today, the family continues the grape growing and wine making traditions.  They make the wine they sell!  Stop in for a taste of the islands.  For more family fun, Perry’s Cave and Family Fun Center is located across the street.  Both are stops on the Put-in-Bay Tour Train trek around PIB. read more 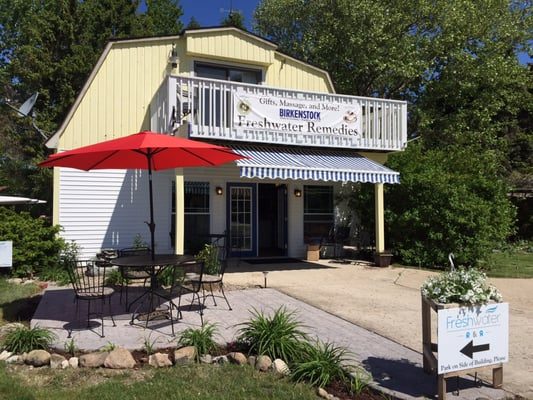 Freshwater Remedies offers all natural products aimed at improving one’s wellness.  These products include organic skin and hair care products lovingly made by the owner.  Also, browse among the fine selection of essential oils.  No matter the choice, shoppers can rest assured that every item has been selected carefully.  So, stop in and boost your well-being today!  This is among the most unique Put-in-Bay Shopping experiences.

This shop is located at the Freshwater Retreat on Langram Road.  Here, guests can enjoy a comfortable stay with exceptional hosts.  Also, they offer great services like a masseuse to increase the relaxation.  The Put-in-Bay Condos are located a short distance from here.  The condos are the premier lodging choice for groups.  Here, stunning water front condos are available for rent. read more 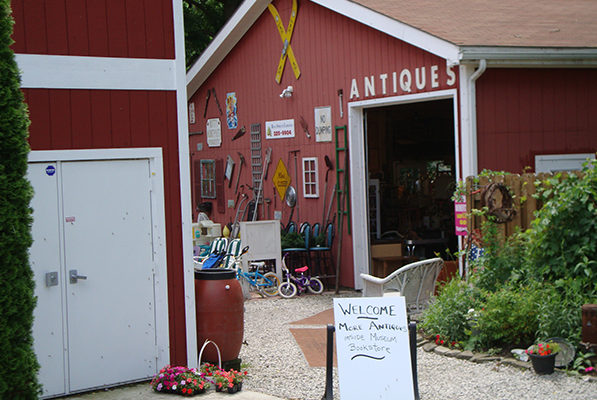 The LEIHS Resale Shop is a great place to find gently used items while helping to preserve the islands history.  The LEIHS or Lake Erie Island Historical Society is pivotal in promoting and preserving the rich history of Put-in-Bay and the Lake Erie Islands.  Their efforts are crucial in saving this information for future generations.  All of the proceeds of the Resale Shop benefit their cause.  Furthermore, the items donated are by islanders themselves.  So, stop in and support this worthy cause.

This store is located behind the Put-in-Bay Police Department and Put-in-Bay Brewery.  Just look for the signs at the street and follow the arrows.  There is plenty of parking for golf carts near the shop. read more 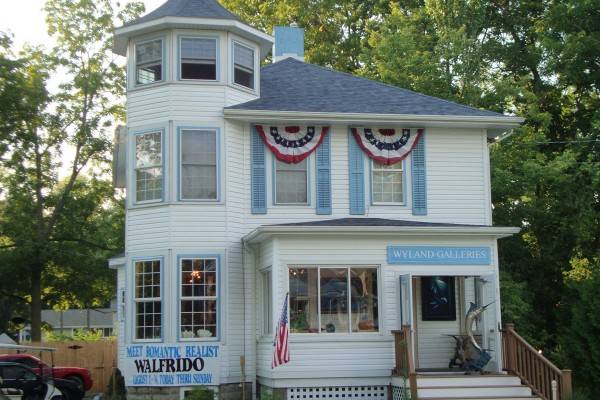 Since 1978, Wyland Galleries has been the art community’s preeminent showcase for the finest in marine life paintings, sculpture and photography. In the spirit of artist Wyland’s original vision, Wyland Galleries continues to provide the highest quality fine art, and is considered one of the world’s premiere fine art galleries, inspiring art lovers and collectors from over seventy countries. Located downtown Put-in-Bay.

The Aquatic Visitors Center is made possible via the Ohio Sea Grant. This freshwater field laboratory is owned by The Ohio State University.  Guests can expect an informative visit at this Put-in-Bay attraction.  Learning and having fun together.

Here, the State of Ohio used to use this building as a Fish Hatchery.  This occurred between 1907 through 1988.  Consequently, this is part of the oldest freshwater field station in the United States.  Stone Lab operates in with this center.  It is located on Gibraltar Island.  Over the 80 years, the hatchery raised many fish species.  Walleye, whitefish, herring, perch, steel head, chinook salmon and coho salmon were among the varieties. read more 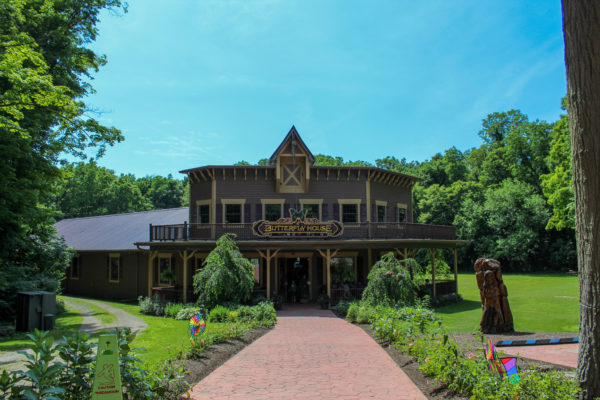 The Butterfly House on Put-in-Bay is a magical place for the whole family.  Step inside and get surrounded by butterflies. Also, take in the lovely grounds inside this favorite island attraction.

Perry’s Cave and Family Fun Center is home to the Butterfly House.  Furthermore, this complex includes many other great activities on Put-in-Bay.  Moreover, guests can opt to purchase a package to do several in one visit.  Also, the Put-in-Bay Tour Train makes stops here. The tour train is a great way to see a large portion of the island.  Most importantly, the guides tell guests about island life.  Also, they expand upon the rich history of the Lake Erie Islands.  So, the Tour Train is worth checking out.  Choose from other great activities at Perry’s Cave and Family Fun Center.  Below is a list of other fun options. read more 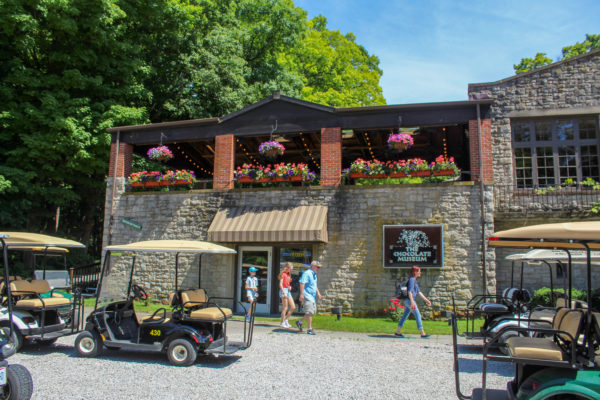 The Chocolate Cafe and Museum is one of the tastiest attractions on Put-in-Bay.  Here, guests can learn about the process of making this favorite treat.  Also, guests can browse the antique memorabilia inside the store.  Moreover, exhibits and displays are quite interesting.  Indulge in tasty chocolate and gain knowledge on the process of production.

Finding this store is easy.  The location is on Catawba Avenue, beneath The Goat Soup and Whiskey.  Furthermore, the cafe is situated between the Put-in-Bay Churches and Heineman’s Winery.  The downtown Put-in-Bay scene is about a mile away. read more 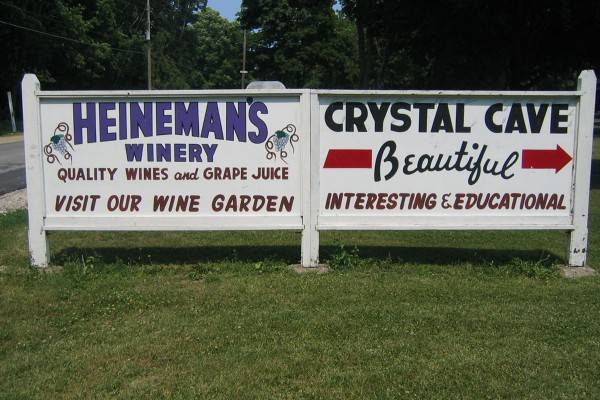 Crystal Cave is a geological treasure on Put-in-Bay.  It is home to the World’s largest geode.  Strontium sulfate lines the walls of this beloved cave.  The site is surely one not to miss out on.

Originally, workers discovered the cave while digging above in 1897.  They were working 40 feet above when the Earth fell into the cavern.  Today, the cavern is much larger than what these men discovered.  The crystals were once harvested to aid in the production of fireworks.  Consequently, the cave grew in size.  Now, the crystals in the cave range from 8 to 14 inches.

An interesting aspect of Crystal Cave is how it prevented Heineman’s Winery from closing.  During Prohibition, it became increasingly difficult to stay open.  Fortunately, the Crystal Cave tours helped to keep the business afloat.  Interestingly, there were many more wineries on the island prior to Prohibition.  However, they did not have a tourist attraction like this to aid them.  Consequently, the other wineries were forced to close.  Thankfully, the great island tradition of wine making continues with the Heineman family. read more